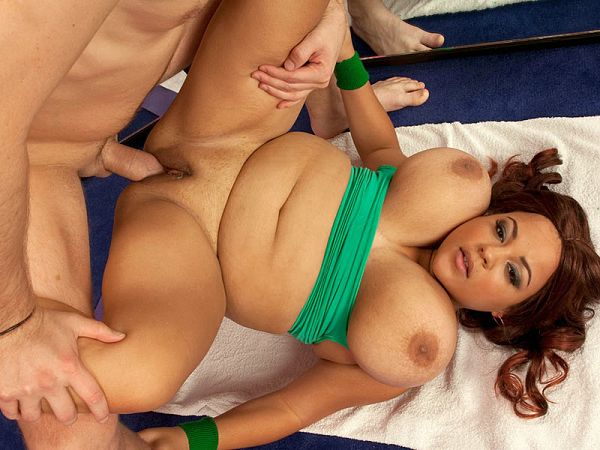 Tatiana Blair was a college student whose ex-boyfriend told her she should apply to be a model to The SCORE Group. Only 4’10” and boasting 36J-cup whopping whoppers, Tatiana began the show with a fitness lesson in a mirrored room. Jumping jacks hurt her because her tits are so heavy, so her trainer has Tatiana switch to push-ups. The trainer gets underneath her pendulous, dangling hangers as an excuse to help her do push-ups better.

One nipple leads to another and before long, the dug sucking begins. Her nipples are pointy and prominent and her areolae are about three inches in diameter. The tit-sucking leads to tit-fucking which leads to cock-sucking and pussy-licking and then to a thrusting fuck, proving that exercise is a very beneficial pursuit and explains why guys become professional fitness trainers.

“I think my height makes my boobs look even bigger,” Tatiana said. “If I were taller then maybe it wouldn’t be as big of a deal. It makes shopping for clothes interesting too. I have to buy large tops to fit my boobs. And finding pants that are short enough for me is really hard. I just hate the feeling of wearing a bra, so I don’t. I’m not going to make myself uncomfortable. But because I don’t wear bras I do get a lot of attention for my boobs. So a lot of the time I’ll wear a sweater to try to cover up a little bit.”

It should be no surprise that all of Tatiana Blair’s boyfriends are tit-maniacs, and if they weren’t in the beginning, they quickly became one.