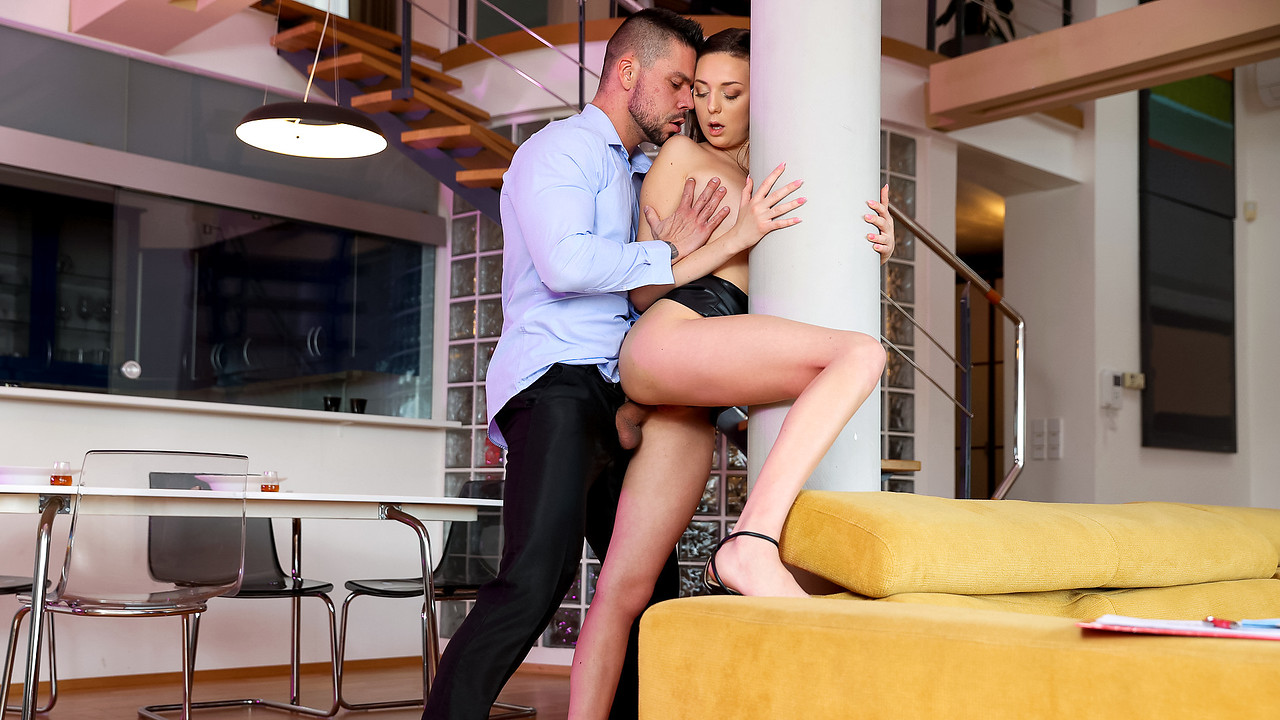 Realtor Angelo Godshack has a great new apartment to show off to his client, Isabella De Laa. When his hot client arrives, Angelo knows he wants to do more than make a sale. He gets nice and close to Isabella as he shows her around, making sure to touch her every chance he gets. Isabella picks up on what Angelo is laying down, and it turns out that she likes what he has to offer on both levels.

Eventually Isabella agrees to take the apartment, but only if it comes with a side of Angelo. She makes her terms clear as Angelo is preparing the paperwork. Sinking to her knees, she unzips Angelo’s pants and makes her pleasure known when his hard cock pops out. Taking him by the root, she pulls Angelo’s hard dick close to start sucking him off. It is clear that Isabella loves sucking cock as she deep throat that thick man meat and gobbles the balls.

Drawing Isabella to her feet, Angelo relieves her of her top as she keeps her hand going stroking him off. Taking a detour through the loveliness of Isabella’s titties, Angelo makes sure to suckle each nipple. Then he gets on his knees to kiss his way down the belly and worship her sweet juices. He gets back to his feet and turns Isabella around, shoving her against a column so that he can lift her miniskirt and shove into her from behind.

Isabella relocates to the couch, still impaled on Angelo’s fuck stick. He follows her without missing a beat. When she is on her knees, Angelo resumes his thrusting. Isabella rocks back to meet every stroke, matching her passion to his in a sensual coupling. She gets to a kneeling position to deliver a delightful kiss as they prepare to change things up once again.

Angelo takes the cue, lifting Isabella into his arms. She’s so light that he can easily slip his hands beneath her ass and guide her back down onto her erection. They rock like that, with Isabella cradled in Angelo’s arms, for a hot minute before Angelo carries her to the table. Setting her down, he pulls out so that he can enjoy a pussy buffet that is flavored with the musk of their passion.

Since Isabella already has one ankle hooked around his shoulder, it’s easy for Angelo to get back to as standing position while simultaneously opening her wide for his ministrations. Shoving his way back inside, he gives it to her deep and slow. Their coupling is filled with passion, but it isn’t quite enough for Isabella to be fully sated.

They move to the couch so that Angelo can take a seat and eat Isabella’s meaty twat out as she sits on his mouth. She slides lower, impaling herself on his hard cock for a lovely ride that elicits breathy moans. When she turns around and takes it in reverse cowgirl, Isabella is content to let Angelo slip his hands beneath her bum and set the exact pace he needs to reach his finish line. She disengages from Angelo as his jizz drips free from her welcoming twat, then gives him one last stroke as they both come down from the high of their orgasmic bliss.