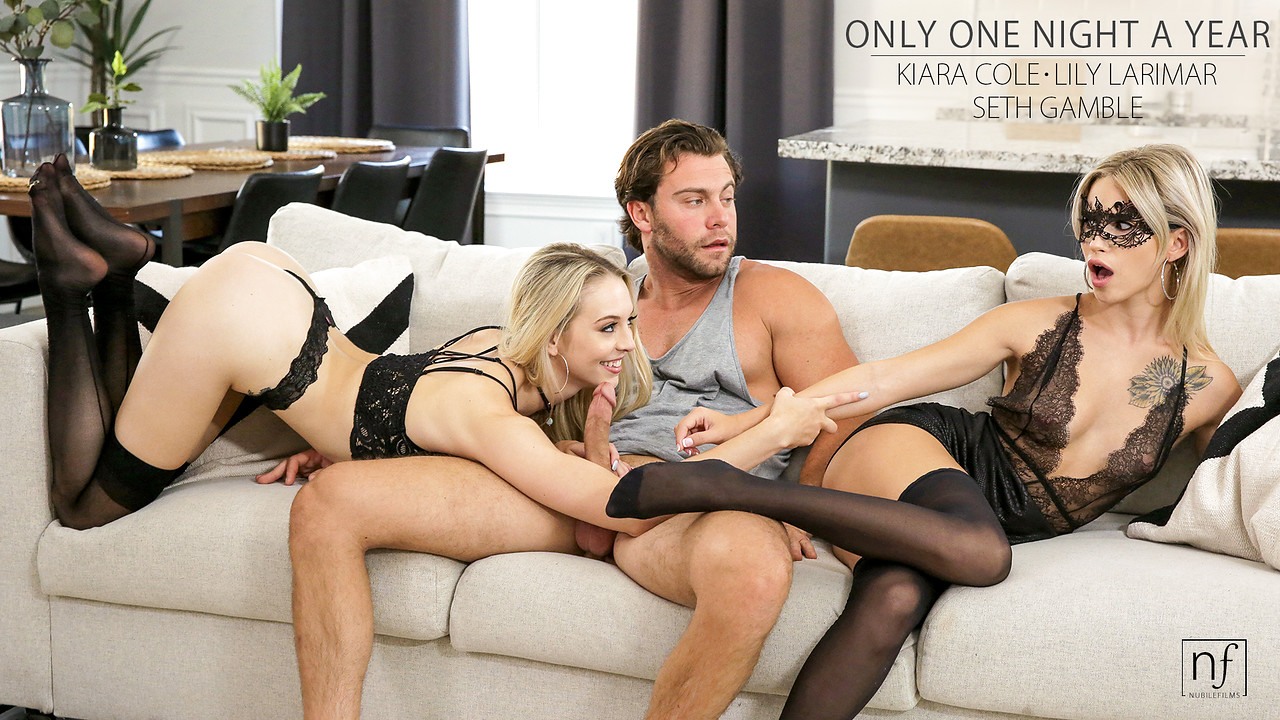 Kiara Cole and her boyfriend Seth Gamble have come home from a long night of Halloween partying with their friend Lily Larimar. Lily excuses herself and Seth tries to get busy with Kiara, but Kiara isn’t interested while Lily is there. She tells Seth no and then lays down on the couch and falls asleep.

Wandering away from his girlfriend, Seth comes across Lily in the bedroom stripping. Lily knows that Seth is there peeping on her, so she gives him a bit of a show, caressing her tits and twat. Seth walks away from temptation, but Lily corners him a few minutes later. Lily claims that she and Kiara used to share everything, even men, but Seth once again finds the willpower to resist.

Lily isn’t about to give up so easily. She follows Seth back into the living room, where he tries to wake Kiara. Climbing onto the couch beside Seth, Lily pops Seth’s dick out and doesn’t wait for permission before she takes what she wants from him. Seth doesn’t know how to resist the deep throat delight of Lily’s BJ without waking Kiara, so he leans his head back and lets it happen.

Kiara wakes up and asks what they’re doing. She tries to tell Lily that they don’t share boys anymore, but Lily isn’t having it. She tugs Kiara’s head down to silence her protests with Seth’s cock. Kiara doesn’t need any more convincing than that. She is instantly reminded of how well she and Lily did share once upon a time, and she can’t wait to enjoy that again.

Soon enough, the girls are going to town with their double blow job. Their hands worth together to create just the right amount of delectable friction. Seth can barely believe his luck at having two luscious babes decked out in their lingerie costumes paying so much attention to his cock.

Lily finally gets her chance to enjoy Seth’s fuck stick with Kiara’s blessing when Seth lays down on the couch and pulls her on top of him. Kiara ensures that Lily is properly seated on Seth’s man meat, then goes ahead to straddle his face. Rocking their hips in tandem, the girls enjoy their mutual fun. Eventually, they meet in a deep kiss even as they continue to ride.

The girls arrange themselves on top of one another next to create a double pussy stack. Lily is on the bottom and Kiara is on top, leaving Seth the option of pounding whichever pussy he wants. He double dips, alternating between them until he has them both gasping and moaning in delight. Then he has Kiara climb off and settle back onto Lily’s mouth so that he can pull her hair and then draw her in to kiss the back of her neck.