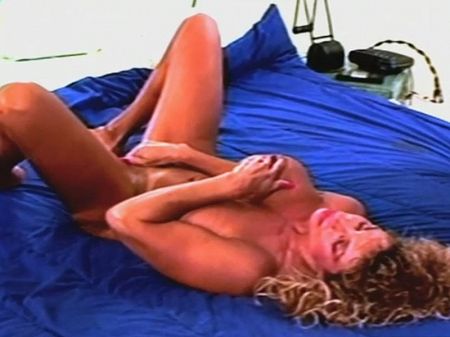 Busty hard-body Lacey Legends was that rarity: a bodybuilder and fitness contest winner who became an exotic dancer and nude model in her early 40s. Very busty muscular women made up a relatively small niche in adult entertainment. Lacey made it hers and excelled. Her nipples are pointy and her breasts are very pliable.

This is one of her earliest videos. Her 44-23-34 figure and bra-busting 38EE-cup size attracted both muscle fans and big-tit fans. She entered stripper shows like the outdoor Ponderosa show in Indiana and often attended adult conventions selling photos and videos.

“I drink a lot of water, about a gallon and a half a day. It flushes the system and gets rid of impurities and it keeps you full-looking. But, I don’t drink water from the tap. Bottled spring water only and then eight to 10 weeks before competition, I drink distilled water.”

In this video, Lacey works out in the living room, plays with herself in the bedroom and dresses for a photo shoot. The video quality is grainy, reflecting the age of the tape and the camera used.