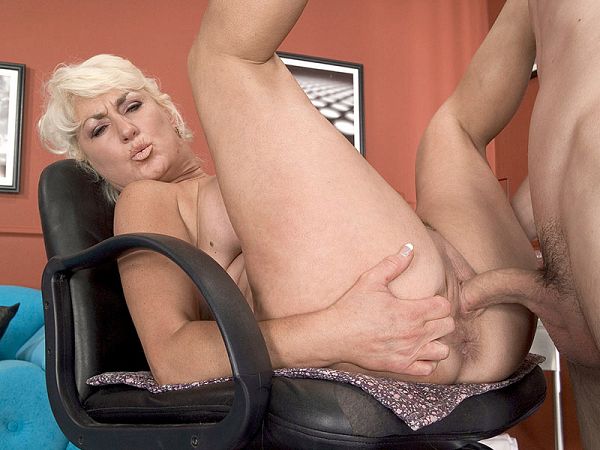 Being the last customer of the day in a hair salon run by busty 50-year-old Dana Hayes can be a very good thing, as we see here. Dana doesn’t cut much hair in this scene. Before long, she’s stuffing her tits in the lucky guy’s face and sucking his dick. Talk about cut and blow! In this case, it’s cunt and blow as Dana works hard to get a good tip. Nice tits, Dana!

When Dana came to our studio for the first time in 2004, she was freshly divorced from a man who refused to fuck her. For years, she put up with it, but when her hubby caught her playing with sex toys, he kicked her to the curb. Best thing that ever happened to Dana. And not a bad thing for us, either.

This scene originally appeared on 40SomethingMag.com and has been remastered for its debut on 50PlusMILFs.com.

“At my age, I like to get right into the nitty gritty with a man,” Dana said. “No need for all that small talk and candle-lit nonsense. I want to suck your shaft and swallow your hot load, and when we’re done, we’ll just start all over again. I’m a voracious old slut in the sack, so can you handle my needs?”