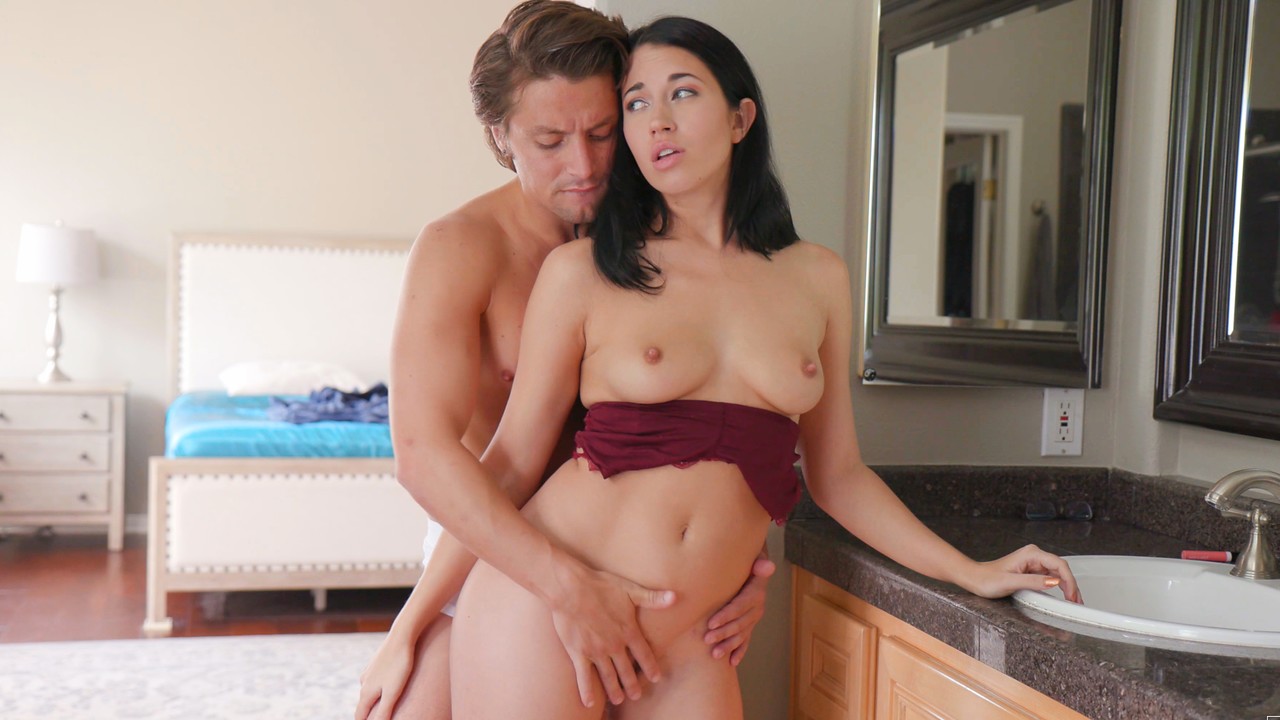 Alex Coal isn’t wearing much as she gets herself all made up. Jay Romero comes up behind her, not wearing much himself. Wrapping his arms around Alex, Jay makes his intentions clear. He squeezes her ass and rolls her thong down. When Jay turns Alex around in his arms and starts rubbing that clit, Alex is instantly putty in his hands.

Sinking to her knees, Alex tugs Jay’s briefs down and pops his stiffie out. She takes his cock in hand to start stroking. Opening wide, Alex explores every inch of Jay’s dick with her tongue and then her mouth. Sucking Jay deep, Alex keeps up her BJ with plenty of enthusiasm, even taking a break to suck Jay’s thumb in a blatant imitation of the act they’re about to commit.

Standing up, Alex wraps her hand around Jay’s cock and uses it to lead him to the bed. Once Jay is on his back, Alex licks at his dick for another hot minute and then climbs aboard to sink down on his fuck stick. Fully impaled, she rocks her hips in a sensual rhythm. Jay reaches behind Alex to grab her ass and help her set a pace that’s mutually satisfying.

When Alex has had enough of being in control, she gets onto her hands and knees so that Jay can come up behind her. Moaning long and loud as Jay takes her in doggy, Alex rocks back to meet every stroke. Her hands fist in the blankets as the pleasure of Jay’s cock overcomes her, leaving her panting but still eager for another round of sensual delight.

Alex finds herself on her back next, legs up in the air and Jay’s tongue making magic as it laps at her clit. He eventually releases one of her legs as he adjusts his position to bury himself inside Alex’s greedy snatch once again. Grabbing Alex’s ankles and pushing them back to make her completely vulnerable to his desires, as he goes as deep as he can. That unrelenting penetration gives Alex a big O that leaves her shaking in delight.